When is the Best Time to Send an Email?

You’ve been meticulously putting together an email for the past two weeks. You’re ready to send! The common wisdom you may hear is that the best time to send an email is at 10am on a Tuesday, but is that true?

We looked at the data on over 7,000 email communications sent through GAIL to try and paint a picture of how our UGA constituents are interacting with our mass communications.

What Data Did We Look At?

Before delving into the results, here is just a brief overview of what data was looked at: We sampled 7246 email campaigns sent through GAIL reaching out with over 76 million individual email messages. We looked at what day and time the emails were sent and compared that information with the open rates for each. What is important to note here is that the open rate does not provide information about when the email was opened, only that is was opened. So if you sent an email between noon and 1PM on a Monday and the open rate was 35%, it doesn’t mean that 35% of people read the email between noon and one, but that they read it at some point. We also gathered information on how many constituents each email was sent to and which school or department sent it.

What Does the Data Show?

The “best” day and time to send an email is Friday between 4PM and 5PM.  But only by a few hundredths of a percentage point, with Tuesday afternoon following closely behind. In fact, sending in the afternoon in general tends to yield greater open rates than earlier in the morning. So why not Tuesday at 10AM? One reason may just be volume. From the data chart provided below, you can see that we send more emails in the morning than in the afternoon, and if other institutions are doing this too, then perhaps our constituents are just overloaded in the AM.

And what about the weekend? Unfortunately, only 109 email communications have been sent on the weekend so there isn’t enough data to say whether these days are good or not.

We were also curious about whether individual schools or departments had more ideal times of day to email than others. We took data from the five most frequent senders and averaged the open rate of all emails they send by hour of day. The results are naturally a little more volatile because of the reduced amount of data, but in general mirror the finding for all sites in that afternoons are preferable to mornings. 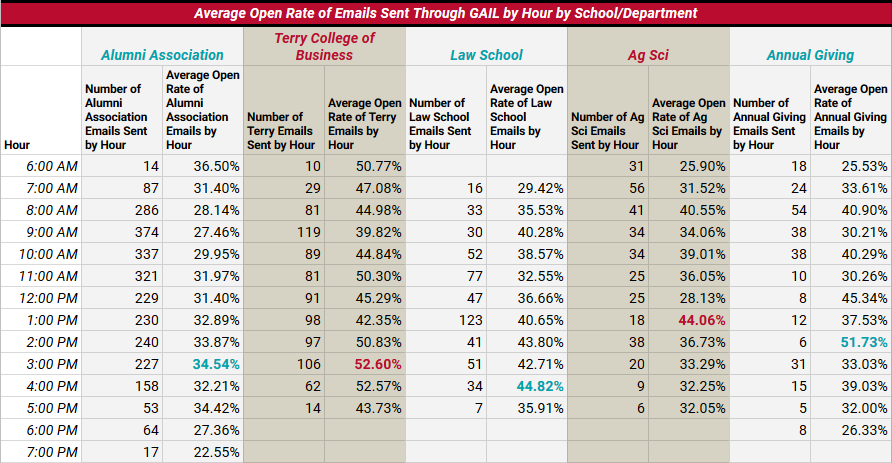 Open Rate vs. Number of Recipients

Finally, we took a cursory glance at the number of people each email communication was sent to and compared it to the the open rate for those emails. Plotting those we can see that in general the more constituents an email is sent to, the less it is opened. Though it is hard to determine from these two variables alone the reason for this, but perhaps an email sent to 1000 people is more targeted and more relevant to those people than one intended for 400,000. If you’re planning on sending out a large communication it may be worth having a discussion on how it can be broken down to target certain groups more specifically. 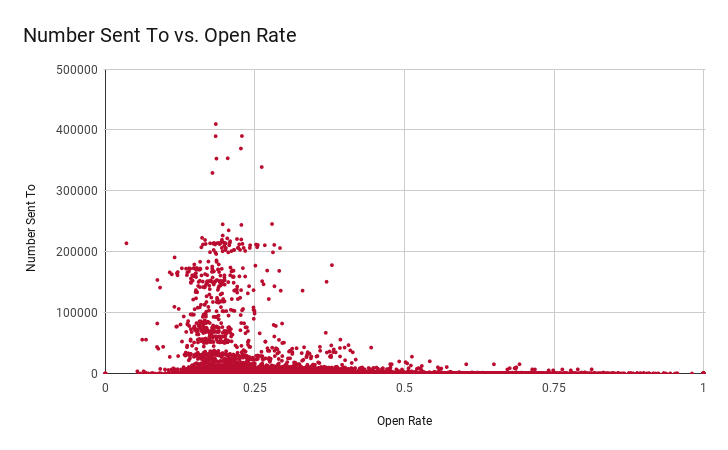 If you’re looking to send at a different time of day to give your email a leg-up, you don’t have to rearrange your whole day. There is an option when you’re ready to send your marketing effort or invitation in GAIL to schedule if for a later time of day. In the start email job dialog box, before hitting start you can adjust the time at the top to later in the day. It is not advised that you schedule an email job that is days and weeks out, stick to the same day. The longer you let an email job sit waiting to be sent, the more your list of recipients is going to get outdated.

The truth is there are a lot of factors beyond a day and time that go into whether your email is going to be read or not, including:

The best advice to glean from this information is to know your constituents and give thoughtful consideration about who you’re choosing to send to, what you are sending them and when you’re reaching out.