Blackshear, Georgia. Population estimate: 3,500. You will see the green road signs like this on the outskirt of towns all across South Georgia. They have done what they can to keep up with the change in times, weathered the economic hardships, and brought in more signs for restaurants, family businesses, school buildings, and boutiques. Although the newest sign in Blackshear will be red and black, reading “Home of UGA Quarterback Stetson Bennett IV, 2021 National Champion.”

The students and fans who stayed in Athens the night of the National Championship game had some signs of their own, where the scene resembled 1998 more than 1980. Luckily for us, Kirby Smart was in Indianapolis rather than in the fraternity house behind the stage hosting Widespread Panic. While Kirby was a finance major back then, his post-game interview would have you think he was a history major. The callback to Larry Munson “There’s gonna’ be some property destroyed tonight!” tied in perfectly to what he told Stetson and the team prior to the game, “Burn the boats*.” 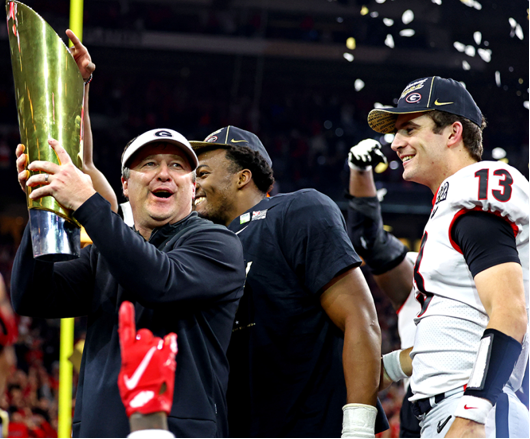 That game was the bulletin board material for skull sessions the team needed. Trevor Moawad’s neutral-thinking philosophy has been integral to the Georgia Football program’s success under Coach Smart. For all of the boo-birds, being recruited over, going to JUCO, and even fumbling the ball to himself in the first quarter, Stetson Bennett IV was the Cinderella that led the University of Georgia back to the college football promised land. We danced with who brought us and luckily the prom limo was also filled with Nakobe Dean and Jordan Davis. It was a HUMMER limo.

The National Championship rematch was an instant classic. Despite the media bemoaning SEC dominance of the playoffs, each possession felt like life or death for both teams. For the Venn diagram of people who are both Georgia Football and Atlanta Braves fans (it is just one circle) there was a little extra glimmer of hope this year after the World Series. If Freddie Freeman and the boys could do it, so could we… but even when Stetson dropped a dime to Adonai Mitchell on a free play for a touchdown, that SEC Championship Game feeling still lingered. Despite leading 71% of the time in games against He Who Shall Not Be Named, Kirby was 0-4 against his previous Professor of The Dark Arts. It was not until Kelee Ringo snatched Heisman Trophy winning Bryce Young’s pass out of the air for a pick six did Will Muschamp and the rest of Dawg Nation unclench their teeth.

For the Bulldog Faithful who have waited for 40 long years to claim a national title once again, a little green road sign may not be enough. But if there is a new one planted on Sanford Drive, I imagine it would just be two simple words that express the sentiments of the entire Bulldog nation, “Go Dawgs!”

*To scuttle your ships before advancing, or burning your boats, is a classical military tactic turned modern leadership style. In 1519, Hernan Cortez landed in what is now Mexico to conquer the Aztecs. Upon arrival, he set the ships ablaze to signal to his men that there would be no retreating, no way to return home, and the only way was through. They would be successful or go down fighting, and it worked.

Now, learning GAIL does not seem so challenging does it? Click here to view our upcoming classes.